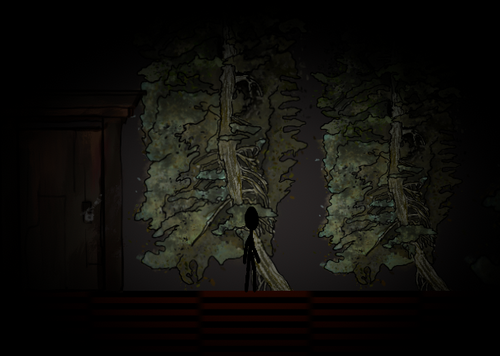 The goal of writing this postmortem is for me to reflect on my mistakes and successes from my last game. Hopefully any indie devs reading this can also learn from it as well. I will be following the gamasutra postmortem format. Without further ado...

"Skitters in the Night" (Skitters) is a side scrolling game horror audio horror game. That's a lot of tag lines, but the idea for it was "a horror game where you have to listen to know where the enemy is".

I made Skitters for the Game Dev Field Guide podcast monthly game jam #1. The theme was "hide and seek" with an optional modifier of "audio based game". The podcast also has a wonderful community on discord, which was super supportive and a great place to bounce ideas and talk game design during the jam.

As the name implies this was a monthly jam, so we had one month to finish - which I really enjoyed, as it gave a lot more flexibility than the usual 72 or 48 hour jam. I did the jam mostly solo, and did the coding and design in Unity. However I also got some great custom assets from artistic friends, and from open source sites (more on that later).

My goal for this game was to have a highly polished game with good thematic effect. I wanted to inspire tension in the player, and evoke the feeling of tingling suspense you get when you stop to listen while in the dark woods or an empty street. A lot of the sound design was inspired by my fear of spiders, and I think that fear carried through.

I definitely learned a ton from making this game. I hope you got something out of this postmortem that you can take into your own games!

Make sure to check out the other jam games, and make sure to join the GDFG discord for some great game dev support!

Get Skitters in the Night

Skitters in the Night

Something is lurking... You'd best stop when it comes near...